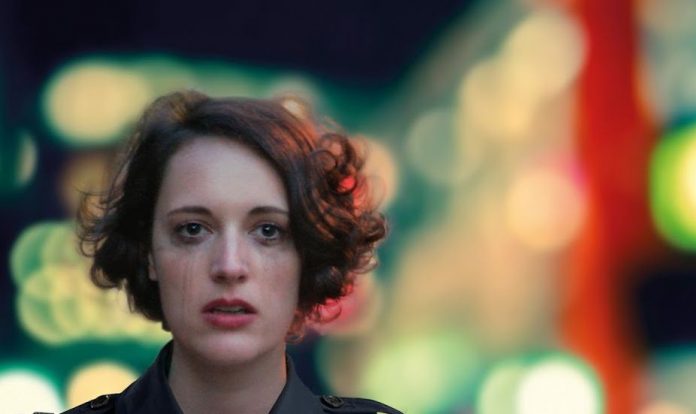 “You know that feeling when a guy you like sends you a text at two o’clock on a Tuesday night asking if he can come and find you, and you’ve accidentally made it out like you’ve just got in yourself, so you have to get out of bed, drink wine, get in the shower, shave everything, dig out some Agent Provocateur business – suspender belt, the whole bit – and wait by the door until the buzzer goes? [BUZZER] And then you open the door to him, like you’ve almost forgotten he’s coming over.” Welcome to the wonderful deranged world of Fleabag, an Amazon Original series adapted from a one woman play by Phoebe Waller-Bridge (who also plays Fleabag in the TV adaptation). That opening line is preceded by a sex scene with anal sex and concludes in a hilarious joke, all in with in the first five minutes of the show. This striking opening sequence sets the tone for more to come as Fleabag drags us into a deeply personal shared experience of her world which will sadly only all come crashing down as we realize we know nothing about her.

This show is a sharp witty take on a modern dislikable woman. Its stark honesty and realistic depiction of modern hookup culture is hilarious and refreshing. Fleabag’s story is one of narcissism, sex, sadness, and dark humor. In many ways, she is unlikable and appears irredeemable, perhaps even irreparably broken. At the same time you can’t help but like her. She is aware of her flaws but at the same time seems to be in love with being bad. Much to the chagrin of those around her and but to her own detriment, Fleabag does what she wants. The show keeps a light tone with Fleabags quick wit and ability to joke about any situation while dealing with complex themes. The show deals with everything from dysfunctional families, infidelity, death of a friend, betrayal, and addiction while managing to keep you laughing. Watching the rocky self destructing/self gratifying rollercoaster of Fleabag is complicated but there are elements I think a lot of people can relate to. We all have an inner Fleabag who rears her ugly head from time to time. Personally, I am a big fan and want more TV like this.

One of the most unique and my personal favorite feature of the show is Fleabags direct address of the camera. As the show went on, I became more and more accustomed to being addressed by Fleabag and hearing her internal monologue (which is dry to the bone and hilarious as hell). As a viewer, you begin to realize the entire show is structured around her perspective and subjective point of view. She introduces you to all the characters and blatantly tells you what there is to know about them, if you should like them or not. However, I came to realize that Fleabag is an exceptionally unreliable narrator because not only is she is trying to hide the truth from you but also herself.  You have been randomly dropped into her life without any prior knowledge and she uses her own perspective and what information she decides to share to shape the entire show. The viewer become an active character in the show as a surrogate friend for Fleabag filling the hole that Boo (her best friend who died) left. You are the only ones she can joke with and give a glimpse at what she’s really feeling. Its an interesting role to fill as a viewer and you almost feel as though you are building bonds with her. You feel connected with Fleabag but gradually begin to realize that she has no one else but this third voyeur party. Her jokes and commentary on life and those around her keeps the show refreshing and highly entertaining while dragging you deeper into her life and apparently complex problems.

The other more subtle underlying element to the show is the loss of Boo and Fleabag’s grief and hidden guilt. The show makes frequent use of flashbacks to show us who Boo was and what she meant to Fleabag. We see how they understood each other fully and were there for each other fully with no judgement. In all respects they appear to be soulmates.

It becomes more understandable why Fleabag is spiraling out of control and the depth of pain that she is trying to hide. There is a correlation between how much we know about Fleabag and how much we see of Boo. Boo’s story leads the emotional arc of the show and as the truth of her death gradually unfolds, the constructed world Fleabag made for us begins to crumble. The incident is only hinted at in the beginning and we would never guess Fleabag was involved, especially given the tender way she refers to her friend and reminisces about their friendship. The most shocking and impactful event of the show happens in the last episode where Claire (Fleabags sister) finally clues us in by bringing up how Fleabag betrayed Boo her best friend, confidant, and soul mate.

Fleabags visceral response to this completely shifts the tone of the show as she looks at us, the audience her surrogate companion, and suddenly realizes we know too much and is afraid of her. Her darkest deepest secret, the root of her internal hatred and pain has been dragged into the limelight and she doesn’t know how to respond. This address of the camera and fear/pain in her eyes is very unnerving and really draws attention to your personal spectatorship. The entire world Fleabag built for us, all she has told and not told us, comes together in this intense emotional arc. There is nothing left to hide; The more we learn about Fleabag, the more she breaks from our expectations. We realize we don’t know everything about her and the fragile world she has built for the viewer that she has been trying to hide in is exposed for the sham it is. We believed she was telling us the truth but suddenly question the entire narrative world rethinking every one of her actions and how fit together with this new information. No longer are you a neutral party for her to banter with; now you know too much and see her for who she really is. The lens that was once her friend become yet another judgmental party wanting answers from her making her deal with her own painful mistakes. You as the viewer also experience sense of loss as you lose the relationship you’ve built with Fleabag over the course of the show. She is not the same friend to us that she use to be. Our relationship has been changed by her deceit just as it was with Boo. This show vastly breaks from the traditional role of a character centered show, expanding the medium itself and the possibilities of what a TV show can be. It’s an exciting time for this medium as television creators become more experimental and are actively redefining the genre to encompass more styles. Fleabag is a product of its time and a refreshing break from the traditional thirty minute sitcom. It is equally hilarious and thoughtful and I would highly recommend giving it a watch.