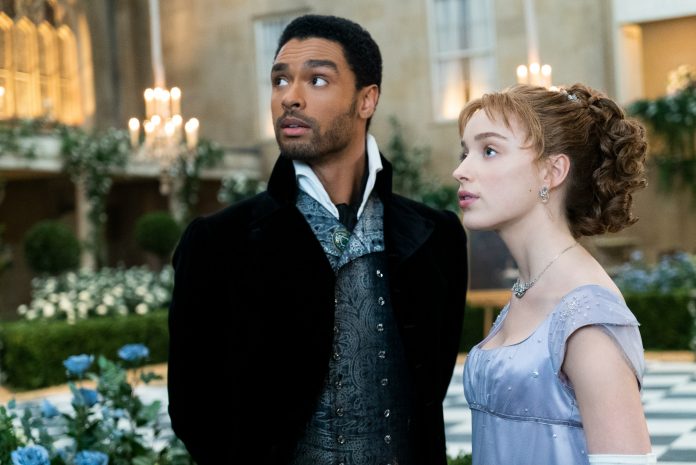 Like many others, obsessed with finding new media to temporarily encapsulate myself with during this time, I gave in to excessive hype and watched the new Shonda Rhimes produced Netflix show Bridgerton. At eight episodes, with each episode about an hour long, it wasn’t hard to binge the first season of the adapted book series within less than a week. Bridgerton is a highly produced, yet highly historically inaccurate, fantastical regency romance overflowing with beautiful actors, sets, and costume designs. For someone who falls asleep during the usual period piece, I was swept off my feet by all the creative liberties taken in the production of this show that made it so much fun to watch. One particular stark difference Bridgerton has, compared to pretty much every other regency piece in existence, is its inclusion of actors of color, especially cast as main characters. In its promotion prior to release, the series was lauded for its “color blind casting” and diversity, sparking excitement and promising representation in a territory exclusively dominated by white actors- think Kiera Knightley and Colin Firth. However, it wasn’t long into my viewing experience to notice that some of the casting choices and their associated storylines left me with feelings of deja vu.

After completing the series, to avoid spoilers of course, I took to the internet to see if my criticisms were being shared. And of course, they were. One issue in particular was the colorism and implicit bias’ that followed in the casting of particular characters. The handsome, leading love interest  ,Simon, the new Duke of Hastings, as well as the beautiful Ms. Marina Thompson played by Regé-Jean Page and Ruby Baker respectively, both break barriers by being cast with Black actors. It is important to note though, that these actors, who both did wonderful jobs, are light-skinned actors. On this same note, the late Duke of Hastings, portrayed by Richard Pepple, villainized in flashbacks of his abuse to Simon, has the one of the darkest complexions of any actor on the show. There’s no secret that Hollywood is plagued with colorism; Emmy winning actress Zendaya put it simply, “I am Hollywood’s acceptable version of a Black girl.” While we must appreciate and applaud the casting directors for their progressive and inclusive casting, we cannot turn a blind eye to these choices of choosing light-skinned actors as protagonists, and a dark-skinned actor as one of the series’ only antagonists. In the same tone, it is notable that Lady Danbury, wonderfully performed by Adjoa Andoh, is a powerful, single Black woman in high society, played by a darker skinned actress. Showrunner Chris Van Dusen argues that the casting was anything but “color blind”,  claiming that “color and race is very much a part of the show and very much a part of the conversation”. As much as this may be true, this does not negate the issues of colorism, usage of stereotypes, and its depth-lacking minimal dialogue surrounding the role of racial integration and struggle relative to the narratives at play.

Having said this, Bridgerton truly is colorful, escapist, dramatic fun. But the question must be posed- why can it only be truly escapist for white audiences? Why can’t Marina Thompson have her happy ending, like the “diamond of the season”, Daphne Bridgerton? Another issue arises in the storylines given to Black characters; mysterious and beautiful debutante Marina Thompson is denied the pleasure of participating in high society due to her pregnancy out of wedlock, and later finds out the man who loves and accepts her and her child has died, and must resort to nuptials of conveniency. Following this same line of questioning, why must Will Mondrich, boxer and confidante of the Duke, as well as another dark-skinned character, be almost villainized for his choice to throw the boxing match to provide financial stability for his family? I found his storyline to be very interesting, but to also lack depth. He seems to be an accessory to the Duke, providing him with advice, all while ‘performing’ for the whiter, wealthier audiences who attend and fund his boxing exhibitions.

While others criticize the show for its historical inaccuracies, like that of the costume design and etiquette of the characters, this lack of historical accuracy could’ve been an easy cop-out for “color blindness” in the casting. But because writers chose to barely dip their toes into the exploration of the role of race and integration, like in flashback sequences of the late Duke of Hastings reflecting society’s demand for “excellency”, or Lady Danbury’s recounting of racial integration only occurring due to a Black woman marrying into royalty, there was much depth left to be desired. Racial struggles and societal pressures are barely suggested, and the series would have been so much more well rounded if they truly addressed race, or left it to be “color-blind” entirely. I think of a personal favorite, the 1997 Rodgers and Hammerstein’s Cinderella, starting Black singer and actress Brandy as the titular Cinderella, and Filipino actor Paolo Montalban as the Prince (who had a white father and Black mother with no provided explanation); which to my knowledge, is the only truly successful use of “colorblind” casting in a fantasy, regency film.

As a white woman, I must consistently and explicitly check my bias and my privilege, especially considering that representation, or lack of, has never been an issue for me as a viewer. However, while the show did many things wonderfully, and considering that it is exciting to witness inclusivity in the genre, viewers must be mindful of the harm done. As a two-steps-forward, one-step-back approach may still be technically progressive, we need to create and push for a dialogue regarding what went well, but what still needs to be corrected. Far too often, audiences, particularly white, comfortable audiences, forget they have voices, and it is extremely important to be transparent about our participation as viewers, and to comment on what went well, but to also critique and challenge writers, producers, casting directors, etc. on what didn’t.