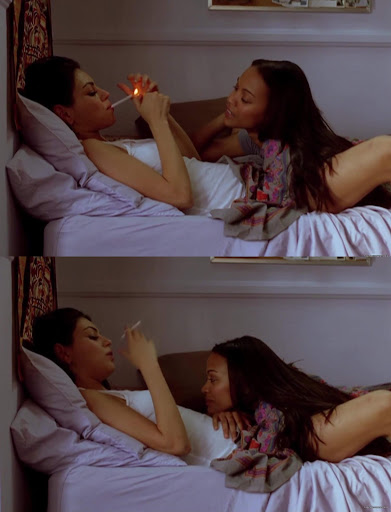 “That’s our dynamic. No more, no less.” In a world hyper-fixated on “being right,” when all else (the social taboo) is labeled as “wrong,” we obsess over the perfection of precision. In a director’s cut from Eric Amadio’s film, After Sex (2007), viewers witness the dishearteningly familiar experience in sexual objectification, pinned upon the queer individual. Unfortunately, this unsurprising expectation of subjugation has become normalized, especially when navigating sexual orientation in a society brainwashed by “post-oppression” theory.
As we are aware, heterosexuality is typically engrained in childhood; binaires ground into our brains. Explorative romantic or sexual behavior, while on the surface-level, is healthy for self-discovery, becomes toxic when deeply-rooted internalized homophobia debilitates self-awareness. However, is a relatively common phenomenon, highlighted in a selected vignette from After Sex, presented through a brief series of non-linear scenes. College student Nikki (Mila Kunis) initiates a “strictly” sexual relationship between her and her roomate, Kat (Zoe Saldana). Nikki suggests her spark of “bi-curiosity,” inquiring particularly erotic details from Kat.
In the story line’s initial scene, after engaging in intimate activities, Kat plays gently with Nikki’s necklace, but Nikki quickly fronts her guard: “You do know this is just casual, right?” Kat draws her tenderness away; she is visibly upset from Nikki’s emotional unavailability, which could be merited as her compulsive heterosexuality. The distress Kat exemplifies towards their “dynamic” is an eerily recognizable reaction to the dismissed, isolating emotions enacted, when the queer individual feels used as an “experiment,” a “one-time fling,” or a fading memory in “innocent sexual exploration.” The discrediting of their sexual intimacy is explicitly asserted through Nikki’s verbal negation in her homosexual interest, repetitively stating, “I’m not into girls.” However, throughout the cinematic vignette, Nikki often contradicts her “abrasive” declarations of her heterosexual identity, which she dubiously clings onto. Nikki, in fact, frequently emphasizes the sexual gratification she recieves from women; from the start, she instigates sensually-suggestive dialgoue, by which Kat has been a responsive recipient. It appears Nikki projects her unresolved queerness onto Kat: “You don’t have to hide the fact you’re gay, I don’t care. You can do whatever you want, I just don’t want you falling in love with me, that’s all.” Self-sabotage can be the accomplice of denial.
At the forefront of the vignette, Kat is unable to admit she is gay, though Nikki assures her awareness of it. Kat does not verbally affirm her lesbianism, until Nikki finally pushes her to admit so. Nikki congratulates her, “It’s like you’re being honest with yourself about who you are,” then teases, “Maybe a little bit of me’s rubbing off on you.” In every joke there usually lies truth. I personally believe, in this case, such emphasis or fascination with another’s sexual orientation can sometimes be a reflection of one’s respective unaddressed identity issues (not always!) Though Kat had struggled to label herself, (which is by no means necessary, but perhaps affirming to one’s sense of sexual orientation), she is confident in her attraction, and does not contradict herself in the way Nikki expresses disillusionment. Nikki explains, “I don’t have patience for that type of bullshit, man or woman,” proposing though if she had desires for anybody, she is too (as she describes herself) “fucked up.” Again, she had contradicted her heteronormativity. Her repressed attraction towards Kat is deranged by her trust in her spoken bluntness, “I call it as I see it.” Though Nikki’s external sensibility is alert, her internal state of genuine acceptance is at war with itself.
Nikki’s blatant curiosity in same-gender attraction is apparent; she is allured by the idea of intimacy with (in her lifetime) a previously “unexplored” gender. Often, attraction can be mistaken for admiration, or worse, fetish. Though Nikki atttempts to affirm past sexual experiences with men, her delivery is arguably bleak and sounds awkward, contrasting the reality of her current sex life. She claims to be lacking pursuits with men, while she is keen on igniting WLW encounters. Meanwhile, Kat is the perfect “target,” as she is intrinsically aware and experienced in her sexuality. However, the two similarly struggle with accepting their looming sense of “identities.” As it is a challenge to acknowledge one’s desire for same gender, in this context, it can even more challenging for a cis-gender woman to recognize her absence of lusting towards men. Furthermore, despite how “different” Nikki acts when intimate with Kat, their growing, mutual, but underlying desire for one another is deemed as a threat. Nikki resents “falling in love,” as she fears her truth of a leniency in her sexual orientation (not straight) could shatter her stagnant understanding of her identity, separated from her fantasies.
From a non-binary/transgender perspective, I have learned that I cannot be perceived, nor perceive others, in a black and white light. In regards to navigating gender norms and roles within my personal life, I have been encountering the rollercoaster of sexual orientation and identity crises. I realized I could not label myself within a binary-based LGBTQIA+ term, and have began grapplling with the hardships encountered in communicating with the cis-gender world. Thus, I want to assure that sexual attraction can be fluid, and is not rigidly set in stone, regardless of any identites or experiences we have believed to hold onto. As they say, attachment leads to suffering, as does desire.