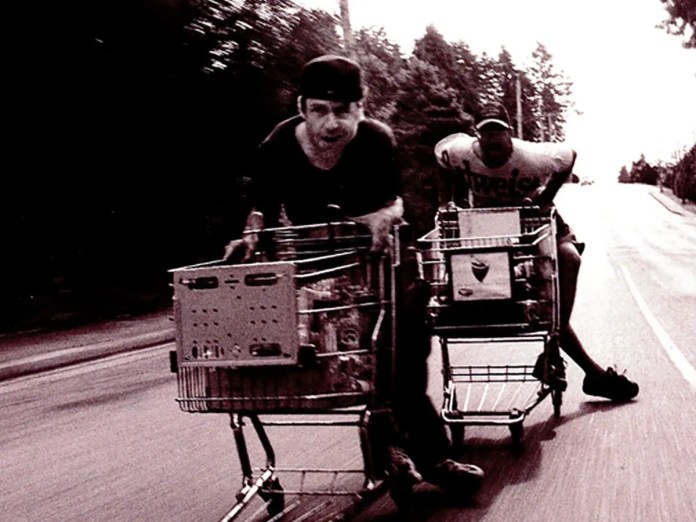 In Murray Siple’s 2008 documentary, Carts of Darkness, Siple follows a group of homeless adrenaline seekers as they seek thrill through means of a shopping cart. Typically, shopping carts are associated with shelter, or as a tool for carrying supplies, for homeless populations. However, these men reject that notion, and instead fill their carts with bricks, bombing the steep hills of Vancouver up to 70 kilometers an hour. Siple shows Al, a young homeless ex-criminal, barricading down the north Canadain terrain as cars honk at him and his sneakers skid against the hot pavement. “I feel free” remarks Al, after getting out of a ten month jail sentence, “first ride since I’ve been out and it was just absolutely fantastic”. He prepared for the occasion as such — obtained a top notch cart, bought new sneakers, and saved his hard-earned money from bottle trading at the local recycling center.

These homeless men seek riches in the blue bins of the wealthy, filling their carts with plastic and glass bottles in an attempt to support themselves. Al says that “on a good day he makes around 70 dollars”,  later exclaiming, “it’s like people are throwing away candy”. That $70 is enough for two and a half good runs on his cart — every hill degrades the toe and grip on his sneakers, which are the only brakes he owns. In fact, Al claims the sneakers are about the only thing about his lifestyle that isn’t free. He obtains free money collecting bottles, free housing in a hidden, forested area nearby a hotel, and free wheels from his local Safeway.

Al is no stranger to this obscure freedom, commenting often that he only has to work from 6:30-11:30AM, once a week, on trash day, or that he doesn’t have to worry about the burdens of a wife and kids. On paper, these comments feel slighted, as if Al does not realize the true happiness of a stable job or happy family. However, Al’s gratuitous perspective is unwavering, and he visits every situation with a simple, punctual, bliss. When showing Siple where he lives, Al mentions, “I pitched this tent right after getting out of jail. It’s perfect”.

This heartfelt appreciation for life is met with a contempt for a fast paced, white-collar society. Siple documents Al and his friends around a small open barbecue in a vacant parking lot, as a middle aged carney proclaims, “Only lazy people starve. You can have all the money in the world, but you know, if they run out of money, we still survive”. One man, nicknamed Fergie, talks about his time in the homeless shelter. “It’s not conducive to recovering from anything,” he says while smoking a cigarette, “I don’t wanna hear everyone else’s problems, all it does is depress the sh*t out of you”. The homeless shelter, an alternative to living on a mossy creek bed, doesn’t help Fergie in the way he needs, or wants, to be helped. He mentions that the longer he can stay where he is, without getting caught, the happier he will be.

These men — the homeless community of North Vancouver — opened up to Siple because they saw an ally in him. They felt ideologically seen in ways they had not been by the homeless shelter, the police, or the rich suburbanites who camouflage their blue bins in an attempt to deter bottle collection. How are these institutions, like shelters, working if they aren’t being received by the groups they claim to uplift? Perhaps these folks are not the ones in need of help, rather the governmental systems are what need drastic and urgent reform. While Al and Fergie may be houseless, they are also incredibly resourceful — never wasting a sip of beer or a drag of a cigarette. That is not to say they are not struggling from something, albeit a mental illness or a traumatic upbringing, that pushed them towards the fringes of society, the fringes of capitalism. However, it would be a loss not to take their drunken truisms, “Life’s a journey, not a destiny”, as without ideological clarity or worth. There should not be pride in excess, in the number of soda bottles one can purchase, but rather in the gratitude and creativity when given a bottle that has nothing in it.