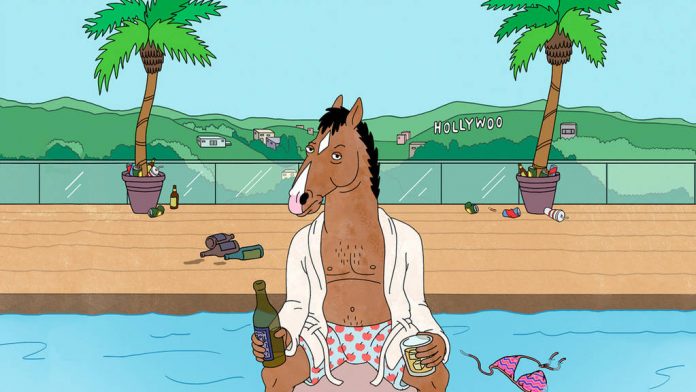 Netflix’s Bojack Horseman has had tremendous success experimenting with new methods of storytelling. Specifically, two episodes come to mind. The show breaks traditional narrative form often, but “Fish out of Water” (season 4, episode 3) and “Free Churro” (season 5, episode 6) are possibly the most blatant. They are so diametrically opposing that a comparison feels warranted. “Fish out of Water” contains little to no dialogue while “Free Churro” is basically a 26-minute monologue. These episodes did a lot for me when I first watched them. From a critical standpoint they amazed me in the elegance of their form. From the standpoint of a Bojack Horseman fan I found myself sympathizing with the character of Bojack in a way I hadn’t before. I attribute this to the incredible storytelling the writers were able to pull off.

After the teaser and intro, “Fish out of Water” contains only a moment of dialogue at the very end. Bubbles, ambient noises, gurgling, and music in the background are the soundtrack. The lack of dialogue causes miscommunication, misunderstanding, and isolation for Bojack. This perfectly coincides with the themes of the episode. Bojack’s feelings of alienation become part of the audience’s experience as well, since we, like Bojack, are struggling to make sense of this new world. The experience of loneliness allows the episode to explore how we connect and the importance of building honest relationships. Bojack is attending an underwater film festival and runs into someone he should have treated better (surprise), he wants to apologize but can’t find the right words and can’t speak underwater. His journey in the episode helps him find the words to apologize but he still has no ability to say anything. When he finally works up the courage to apologize via a handwritten note the ink runs making the note illegible. The tragicomedy of the episode comes at the very end when Bojack realizes he had the ability to speak the entire time, all he had to do was push a button on his helmet. This episode is full of emotion, thought, and is downright entertaining without the use of spoken word.

Unlike “Fish out of Water”, “Free Churro” relies entirely on speech in the form of Bojack eulogizing his mother. Similar to in “Fish out of Water”, the teaser betrays the premise of the episode in that it’s not part of Bojack’s monologue eulogy. In a sort of role reversal, the teaser is Bojack’s father ranting to him about Bojack’s mother. Aside from the teaser, the episode takes place in one location, with one voice speaking to the audience. A testament to Will Arnett’s skill as an actor, in this case voice-over, that he can make us feel so much without any help. There are no flashy, exciting, or new locations. There are no other characters for him to bounce off. It’s simply Bojack standing in front of a casket and speaking at a podium. Similar to the end of “Fish out of Water” the episode ends in a moment of clarity in which Bojack finds out he’s been eulogizing to the wrong room with the wrong person in the casket. From this we realize that it never really mattered anyway. The eulogy was just a way for Bojack to process how his feelings about his mom and her death.

Both episodes focus on relationships, connections, and the importance of them, but they make meaning through opposing strategies. These two episodes also work to provide an intimate portrait of Bojack and give us insight into his past and his psyche. By breaking the mold, “Fish out of Water” and “Free Churro” show us that television even animated television, can go beyond what it has typically been thought of. The way that Bojack Horseman breaks form and typical television narrative without sacrificing story is no simple feat.