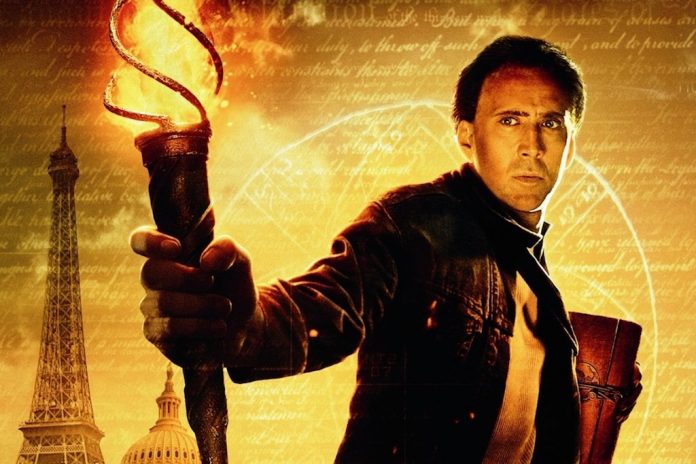 Not in a so-bad-it’s-good way. Not even in an ehh-it’s-whatever-I’ll-watch-it-if-it’s-on way. It really, actually is a good movie. My name is Cole Kronman, and I love National Treasure.

The elephant in the room is, of course, Nicolas Cage. I’ll readily admit that he’s quite possibly the most mockable celebrity of all time – we’ve all seen such classics as “I’M A VAMPIRE!” and “NOT THE BEES!” – but I mock Cage the same way I’d mock a little brother. I love the guy. He truly shines in the right role (if you think I’m lying, please, please watch Raising Arizona), and even in his more… eccentric performances, the amount of charisma he brings to the table is nothing short of admirable. Hilarious, but admirable.

Thing is, I feel like National Treasure is unfairly caught in the crossfire of these discussions. When Cage naysayers try claiming he’s a bad actor, it’s usually the first thing they bring up. “Man, remember when he said he was gonna steal the Declaration of Independence? Wasn’t that LAME?” Actually, no, it was super awesome, and so is the rest of the movie. I don’t know when we all decided that National Treasure sucks, but I’m here to set the record straight.

Plot-wise, yeah, it’s pretty basic stuff. A historian, Benjamin Gates, is hunting for a lost treasure supposedly hinted at on the back of the Declaration of Independence. To find it, he’s gonna have to crack codes, solve riddles, and deliver a couple funny one-liners. Nothing too special.

That’s just it, though. National Treasure makes a point of leaning hard into well-tread action movie cliches, and it does so in ways that are consistently, wonderfully fun. Part of me suspects that’s why the movie gets a lot of flak – it’s a very goofy, family-friendly romp, and that can be jarring when viewed next to a legacy of hyper violent films like Terminator and Die Hard. Ben Gates isn’t a muscled manwich with a semi-automatic slung over his shoulder. He’s an idealist, a family man, someone who’s in the game not for power, not for revenge, but for discovery. Here is an action hero who’s not afraid to be sincere, who goes weak in the knees when he sees a historical monument, overcome by the sheer beauty of it all. Cage, with his oddball, weirdly down-to-earth persona, couldn’t be a better fit.

This optimism extends to every corner of the movie. The three main characters – protagonist Ben, sidekick Riley, and love interest Abigail – have great chemistry, and share an infectious appreciation for historiography. There’s the odd chase scene, but the movie’s most gripping moments are when someone is on the verge of solving a particularly tricky puzzle (and for what it’s worth, this movie has some great puzzles; the scene where they pull Benjamin Franklin’s glasses out of a secret alcove behind Independence Hall still blows my mind). Sean Bean plays the antagonist, Ian, as an overgrown schoolyard bully, irked by his rival’s success. At the end, rather than going down in a bombastic gunfight, he’s simply led away in cuffs. And when Ben finds the treasure he’s been looking for his whole life, he makes it public, putting that knowledge in the hands of the people. In his eyes, history shouldn’t be kept from anyone.

Good-natured candor like this is in short supply in Hollywood. Amid an endless sea of grittiness, a sunny-side-up action-adventure escapade that actively pushes against cynicism is a rare gem. That’s not to say gritty films don’t have their place – they absolutely do – but sometimes you just need a break. And right now, more than ever, I think that break is well-deserved. In this era of rampant bigotry and institutional incompetence on practically every level, Ben Gates is an endlessly refreshing character. He believes, more than anything, in good old-fashioned democracy: the inalienable rights of the common man, and the responsibility of elected leaders to work in their country’s best interests. Here in the real world, that sort of thing seems more and more like a far-flung fantasy every day. For the time being, maybe National Treasure can be that fantasy.