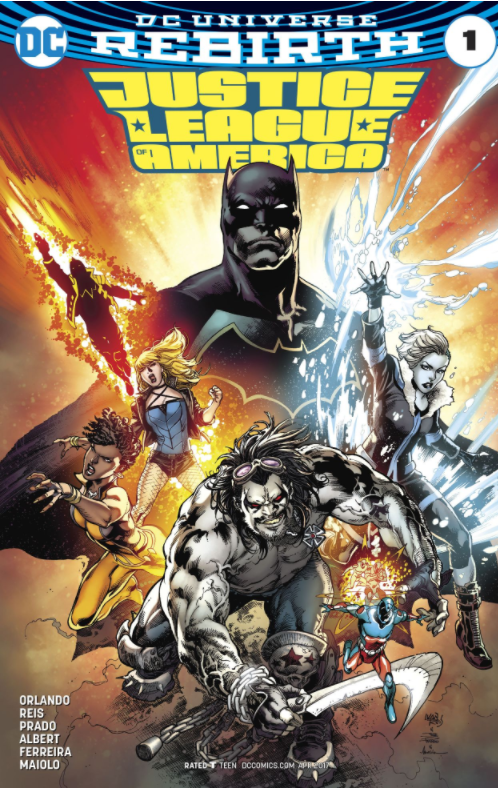 There are ways to read the new Justice League of America comic as some kind of response to America’s new political reality. The first arc of the series features the Justice League doing battle against The Extremists, a group that believes Earth’s survival depends on the acceptance of their authoritarian rule. As their leader Havok shouts in the first issue: “Freedom is too dangerous to be unchecked. Only a strong hand can bring safety to order.” Battles between heroes and villains with vaguely articulated political beliefs (the heroes always standing for some kind of democracy) is nothing new in superhero stories. If JLA seems to have a more specific position on the relationship between people and political structures, it comes not from the representation of the supervillains in the story but from the depiction of our superheroes.

For one thing, the roster of this Justice League of America is ever so slightly more diverse than the current Justice League. There are a couple of queer superheroes and more gender balance on the team. There’s actually one less person of color on this new team, but the team is one person smaller, there are three less straight white men, and two of the three superheroes of color in the Justice League are technically replacements for their straight white male predecessor (who is off in space). I’m uncomfortable with the idea that this meagre representation really means anything in and of itself, especially given that the series, like almost every comic book at DC, is written by a white guy, and that it exists as an addendum to the Justice League series. This is the Justice League with the possibly reductive “Of America” tagged on. And I’m uncomfortable with what it might mean that this team is the one that Batman chooses because he believes “people need to see heroes are human.” Is the implicit suggestion that superheroes who are women, queer, or non-white can only be on the Justice-League-That’s-More-Human? Or that this team is only allowed to exist as long as a separate, more powerful, more god-like Justice League is still in place? It doesn’t help that the advertisements ahead of the release billed the team as “The Roughest League of All Time.” Ostensibly this tag line refers to the fact that two of the members are reformed supervillains, and yet…

At the same time, I wanted to write this blog post not to complain about the weirdness of DC’s promotional campaign, but because of some moments in the series that I love. Again, the supervillains are the same old supervillains, but the heroes’ response to them feels different. Havok and the Extremists quickly take control of the country of Kravia, and because the country is an internationally recognized sovereign nation, the Justice League of America is at a loss for what to do. In the third issue  of JLA, an entire page early in the issue shows the Kravian rebels hiding from Havok, who lament: “our home has been taken by those meant to protect us.” We understand, before the Justice League even shows up, that if they are going to be any better than the supervillains, they must think about what it means to protect. The league appears in a large spread on the next page. In a typical spread from the other Justice League comic, every hero stands straight and tall, their hands on their hips or clenched at their side. Here, though, Black Canary stands in the front, her arms open and outstretched, Vixen kneels, Frost sits on the balcony, Atom appears to have his head down. This Justice League of America appears less sure of themselves and less paternalistic than their Justice League counterparts. Batman underscores this new position by telling the Kravian rebel leader: “We’re here to ask how we can help.” I’ve seen the Justice League pronounce that they’re here to help a hundred thousand times, but I don’t think I’ve seen a superhero ask how they can help. “We’re not here to give orders,” Vixen says. “Just tell us what you need,” Black Canary adds.

When I read this issue, I was moved to see a Justice League that wants to know how it can help. A Justice League that wants to know what its people want from them. I decided to write this article to suggest that the work of comic book writers in the present day should be to create self-conscious superheroes who actively work to make sure they battle, and do not become, authoritarians that assume they know what’s best for everyone else. Justice League of America underscores this message in the last scene of the first arc, where Batman expresses concern that the Kravian government, and not the league, will be holding Havok prisoner. “This is a win, Batman…just a different one than you’re used to. They told us what they need. We gave it to them.” This Justice League, perhaps, will not assume its own justice system. They will listen to people around the world and learn to ask, as Batman asked, how they can help.

I want to say now that I have an underlying ambivalence about writing this article. I hold two feelings in me at once. On one hand, I believe that this is all relatively meaningless. Superheroes aren’t real, they don’t affect political change, probably very few people who do are reading these books. Also, these moments of empathy take place within pages and pages of people punching each other. And yet, I personally believe in superheroes so strongly, in the power in the idea of empathy and aid that lies at the heart of the best superheroes. And in holding these two feelings at once, I don’t know how to end this article. I don’t know which is more disingenuous, a note of hope or an acknowledgement that important activism probably doesn’t happen here.

There’s a steep hill in Noe Valley, San Francisco, that I used to walk up sometimes, to pick up my sister from tutoring. Every time I walked up the hill, I couldn’t help but hop a little, thinking that perhaps I would not, immediately, touch the ground. I am going to end my blog post by telling you how much I wanted to, still want to, perhaps believe I will, become a superhero. And to confess that maybe I love Steve Orlando’s Justice League of America because it feels like a pretty good road map for how I should behave when I finally get my powers.