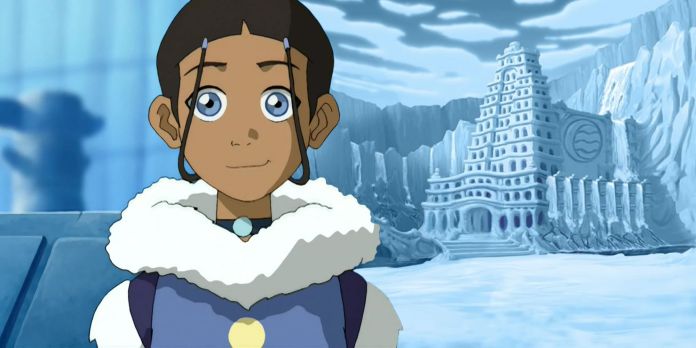 Avatar: The Last Airbender is an animated TV series initially aired on Nickelodeon in 2005. Since this animated series was included in Netflix recently, many new and old conversations have emerged to the surface. The series revolves around Avatar Aang’s journey in finding significant influences to become the master of all elements and save the world. Many of those influences feature a number of “‘strong women”, but “strength” is not seen as their only valuable quality”. These women also represent the intersectionality of third-wave feminism, constructing a model of diversity and inclusivity coherent to viewers of all ages. Likewise, female characters like Katara become significant to lead the conversation of feminism and female agency in Avatar: The Last Airbender.

Throughout the series, we come to understand that Katara is a sophisticated and complex character. She battles many internal conflicts, one of them being her struggle to come to terms with her mother’s death. Katara goes through stages of grief and anger until she takes the initiative to find the man who took her mother’s life. In the beginning of her journey, she seems determined to take avenge for her mother. However, when the opportunity arrives, she doesn’t take violence for an answer. This experience transforms Katara into a complex and “real” character with empathy and maturity. Similarly, Katara’s feminist values develop her into a respected water bending master. In Book 1, Katara is shunned from a water bending master because traditionally women are not allowed to learn water bending. However, Katara endorses female agency by challenging the master to a water bending match. As a result, Katara defies patriarchy and proves herself worthy of respect. Moreover, Katara experiences growth in her leadership, confidence, and independence through her journey in Book 3. When the extreme pressure to kill the Firelord gets Avatar Aang emotional, Katara takes control of the situation with leadership and patience. She calms the Avatar, offers advice, and provides comfort as a figure of matriarchy. In fact, Katara becomes a prominent character in the series demonstrating ““womanly” virtues without being stereotypically feminine”. The nurturing and virtuous examples that Katara sets out for the people around her become reminders of strength and kindness.

In the series, one of the core values that encourage Aang’s growth as an Avatar is friendship. Although Aang becomes the most powerful bender in the world, his journey would not have been possible without friends. Katara, as one of Aang’s closest friends, often guides Aang to do the right thing. She is an influential figure who is loving and humane. These feminine qualities of Katara serve as one of her greatest strengths that influences the Avatar from achieving world peace. Evidently, Katara is not just one of the side characters, but she is an irreplaceable character with an agency to depict her own story. Furthermore, Katara as “a woman of color from the oppressed and marginalized community” represents the intersectionality of third wave feminism. The third wave feminism movement strives to advocate for women of all race, ethnicity, class, religion, and gender. Hence, the third-wave feminism acknowledges that this movement is no longer one-dimensional. Defying the popular models of feminism, Avatar: The Last Airbender gives representation to women of color, women with disability, and women of different class. Frankly, this series is a helpful example to understand feminism and diversity for more works to come.