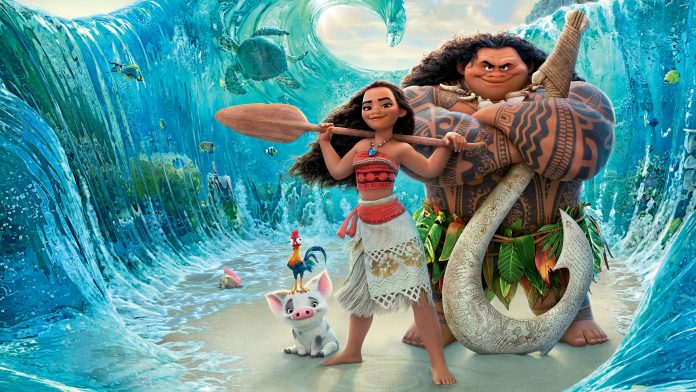 As someone with Native Hawaiian ancestry, I was excited to see Disney’s new feature film, Moana (2016). However, I was skeptical of what I was about to see. Would it be an accurate portrayal of cultures that seldom get screen time, except for when their land is marketed to visitors to buy? I was skeptical because Disney is a for-profit company that will see all the income for this film, so what incentive did they have to depict these cultures in an accurate way? Lastly, I was skeptical because Disney’s Halloween costume page tried to sell a brownface costume of Maui the Demigod, complete with a muscular body and tattoos printed all over it. Surprisingly, even with all of my initial reservations, I left the theater happy with what I saw. Disney did a great job with their cultural research and the digital art was just as beautiful as the story. Yet, I had one question:

What culture is this movie about?

I’ve studied Oceania, with a special focus on the many different tattoo styles of the countries within Oceania. Each style is distinct and meaningful to each particular culture. While watching Moana, I noticed that Disney did their research in this area, too. Moana’s father has a traditional Samoan Pe’a, while Moana’s grandmother had ink that seemed more Hawaiian-style.

Yet, I believe the film purposefully tried to blend the traditional tattoo styles from more than one country so as to create more ambiguity around where Moana is actually from. It makes sense at first, because I suppose the story takes place 2,000 years ago, when not all of the islands have been voyaged to yet. But if that is the case, Disney would not use Hawaiian mythology (Maui’s character), since Hawai’i was not even populated at this time. So who knows what time period this narrative took place in, since it seems to be both old and modern?

I’m not by any means saying that the story wasn’t good or that Moana is not worth watching, but it is important to think about the implications of a film that blends multiple cultures to create a generic representation. Although Pacific cultures are similar in many ways, there are still distinctions that set them all apart, like how not all islands have the same ink style. So does combining Samoan, Hawaiian, Tahitian, Fijian, and Maori tattoo styles found in Moana perpetuate the dreaded “tribal” genre found everywhere in tattoo shops?

I believe Disney’s intent was to not show a preference for a specific culture, so the company decided to be all-inclusive and represent a little bit of all of Polynesia within the film. However, there are better ways to do it that celebrate diversity instead of glossing over it like Disney did with Moana. Personally, I believe Disney just wanted the biggest target audience for the film, doing whatever it took to see more profit. Overall, despite the ambiguity of its cultural depictions, Moana does seem to be moving in the right direction, providing a space for the representation of Polynesian cultures.