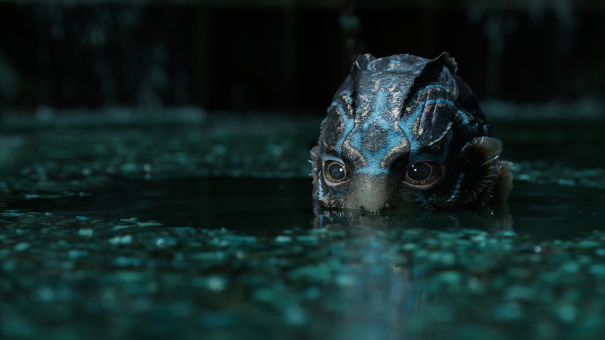 About a year ago I watched Guillermo Del Toro’s The Shape of Water (2017) win four awards from the Academy of Motion Picture Arts and Sciences. Del Toro himself had to check the envelope that contained the winning film himself just to make sure it was real. Of course last year the wrong film was announced as the winner, so it was perfectly and comically understandable why he had to check. At the same time, to see a film about a love story between a human and an otherworldly creature win so big at the most prestigious awards ceremony in the industry was astounding to see. It is remarkable that, over the course of the twentieth century and into the twenty-first, the being of the “monster” has evolved from something horrifying into a being that can be loved and desired.

Creature from the Black Lagoon (1954) is where Del Toro got the most inspiration for his own creature in The Shape of Water. It can even be theorized that the Creature in the film from 1954 is the very same in Del Toro’s film, but that is a concept for another article. The original focuses on the premise of the unknown, and what could be more unknown than what lies in the depths of our planet’s waters? This is a fascinating premise that quickly diverts to particularly conservative conventions of the era that still persist today. The female protagonist is in a close relationship with the male archetype of the film, projecting a heterosexual normalcy into the narrative. Now in comes “the creature,” who is not human but animal, and also desires the female protagonist. It is a particular queering of the normalcy, introducing an “other” who is presented as being unnaturally attracted to a human female rather than sticking to his own kind. It is this kind of othering that is explored in a more critical approach in Del Toro’s film. The ending can be described as tragic as the male and female protagonists don’t wish for the creature to be destroyed. Unfortunately, however, the creature is shot to death and falls into the lagoon.

At its core, The Shape of Water is a tragic love story with a surprisingly happy ending, a modern Romeo & Juliet where (spoiler alert) the lovers actually survive to the end and float away into mystery. Much of the film shares similarities to Creature from the Black Lagoon. The creature is portrayed as misunderstood, yet at the same time understandably dangerous as he is a predator. The entire film focuses around the ambiguity of the “other,” around what it is like to be an outsider. Elisa is a mute and can only communicate through sign language. Her best friend and neighbor Giles is an aged homosexual male. Her close friend and co-worker Zelda is African-American. And the love of her life is an amphibious creature being treated as a experiment. All of this is set in the tumultuous Cold War era, a time of rampant fear and distrust. Elisa’s relationship with the creature affects her friends and brings them to perceive revelations about their own othering in society as the film progresses. It also brings into question what it means to be a monster in general, as the male villain of the film proves to be particularly monstrous himself, sometimes to a very gruesome degree such as when he is being violently intimate with his wife while covering her mouth with his bandaged and infected hand.

Del Toro expertly explores the concept of what it means to be an other in this film. He questions normalities that society has become so used to from many different angles. The monster has historically been violent, been an “other,” and has been something to fear and loathe. For Del Toro and for many of us who find horror an ever-fascinating genre, the monster is the most misunderstood and fascinating being in cinema.

This post is dedicated to Julie Adams, the female star of Creature from the Black Lagoon, who tragically passed away on Sunday, February 3, 2019. Rest in peace.