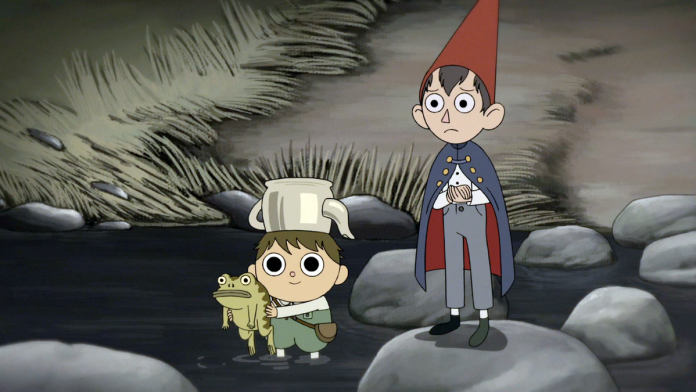 As an enthusiast of all types of animation in combination with the excessive amount of binge-watching that has commenced in my life due to the regional stay-at-home order, I have come across one series that has truly piqued my interest. While Cartoon Network’s Adventure Time, along with various adult animation series like Rick and Morty and Bojack Horseman remain some of my absolute favorites of the genre, this show presented something unique that left me craving for more. Cartoon Network’s  Over the Garden Wall is a ten-episode mini-series that exquisitely tells the story of two lost brothers attempting to navigate their way out of a strange, mystical forest referred to as The Unknown.

There are a plethora of different elements that I admire about the series. The dark fairytale visual aesthetics initially drew me in and I appreciate how the overarching theme of horror is often comically diminished by the young main protagonists, Wirt and Greg. I was also starting to build an emotional connection with the two brothers as I found myself constantly rooting for them to make their way out of The Unknown. A variety of themes are blended together to create one cohesive journey, such as: fairytale lore, horror, comedy, adventure, and existentialism. What I admire the most about this show is that it is made for and advertised to children. The valuable lessons that are taught within each episode along with the careful approach to the blending of themes allow me to come to the conclusion that this series should be poised as a model, amongst other similar shows, for what the future of children’s television should look like. In addition, although it is marketed as a show for children, adults should also have the pleasure of watching it.

From the popular children’s cartoons that I have been exposed to, I have noticed that it is more common for these types of shows to follow a more formulaic approach to their overall structures. This formula makes up for the lack of a continuous storyline that can be seen in Over the Garden Wall. These shows, like The Amazing World of Gumball, Teen Titans Go!, and other Cartoon Network shows are created more so for entertainment. They either depict characters whose objective is to ward off evil or depict somewhat outrageous characters in a comedic way. While these types of shows tend to be more longrunning by containing multiple seasons, their prominence (and therefore popularity) is much higher than shows that intentionally hold educational content. Over the Garden Wall is clearly not the only series that contains a complex structure, but I argue that the shows that hold little to no educational value are the shows that are being produced in larger quantities. The educational aspects that I illuminate are those that intentionally teach the audience life lessons while simultaneously entertaining them in an artistic manner. For example, two main lessons that are taught in Over the Garden Wall are to keep on trying despite the easiness of giving up and to remain hopeful with growing cynicism. This allows children to retain life knowledge while also allowing them to become enveloped in a mystical journey. Another example of a high-production children’s television show that holds educational and artistic merit is the ongoing Netflix Original Hilda. This multiple-season show has been praised for its playful and adventurous storyline as well as its elements of valuable lessons. Other shows that are similar to Hilda and Over the Garden Wall are harder to come by. Essentially, there should be more of a balance of high-production shows that have intellectual engagement and shows that are made for pure entertainment. Rather than having a large array of shows whose goals solely lay in entertainment value (like many popular Cartoon Network shows) or educational value (like Seasame Street), I would like to see an increasing balance of the intentions of the future of children’s shows that are produced.

Especially for those who are fans of adult animation, or animation in general, this show incorporates complex ideas that are not very common in children’s series. It makes the audience question the legitimacy of narrative aspects and incorporates existential elements that provoke the audience to think and reflect on the potential symbols and characters as a reflection of humanity. Although the series was made for children, it should not hinder the interest of older-aged audiences because there are many hidden ideas that require a higher level of understanding. The blending of genres and the world itself is an enriched artistic environment that creates a very visually appealing experience. Thus, the visuals alone produce a mystical aura of fairytale pleasure.
At first glance, I did not expect much from the show. I thought that it was going to be another Cartoon Network series that I would watch on a whim because I had nothing better to do at the time. What I did not expect was the profound effect that the narrative style had on me, as well as the thought-provoking subjects that it tackled. I encourage that the future of children’s animation takes on the role of producing more shows that combine factors of life lessons, more concrete yet entertaining storylines, and pleasing visual aesthetics as well as encourage viewers of all ages to watch and digest the wonders of Over the Garden Wall.