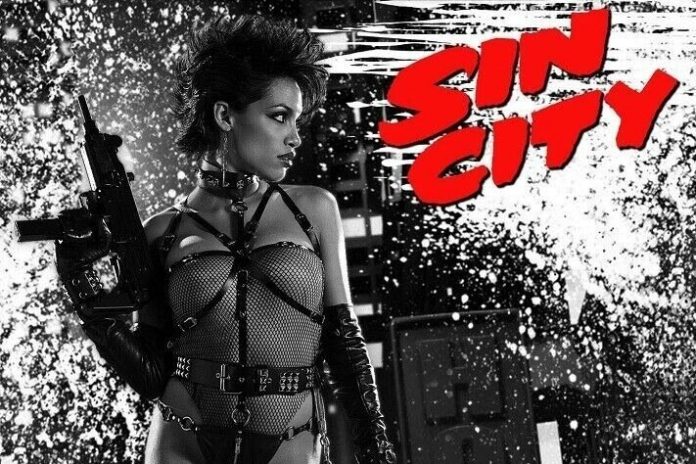 One of my favorite movies of all time is the 2005 crime anthology Sin City, a film once described by Roger Ebert as “a comic book brought to life and pumped with steroids.” Sin City is based on the comic book series of the same name, where it’s always raining and the streets are plagued with vigilante gangsters, corrupt cops, and bad-bitch prostitutes. The film has kept me coming back for its stylized presentation, intriguing characters, cheesy dialogue, and hilarious action sequences that take every action and noir trope to its absurd extreme. However, every time I watch Sin City, I am intimately aware that I am watching something not meant for me because the film also has a serious problem depicting women.

For example, Jessica Alba plays Nancy, a little girl saved from a serial killer and pedophile by police detective Jack Hartigan, played by Bruce Willis. Hartigan is framed for the crime, and when he is finally released from prison years later (a conveniently long enough time for Nancy to be of age and working as a stripper), she reveals she has fallen in love with the older man despite them never actually having a proper conversation.

Nancy’s a cool girl. She’s comfortable in her sexuality, has dreams of becoming a lawyer, and fixes cars in her spare time. But these character traits are mentioned in passing; she only really exists as a sexual reward and ego boost for Hartigan’s time in prison. This becomes clear when she is kidnapped by the same serial killer from her childhood and has to be saved by Hartigan. Though it would have made more sense for her to protect herself and Hartigan, proving that “skinny little Nancy” had grown up to be just as strong and independent as the narrative pretends she is, the story isn’t about her. It’s about the injustice of Hartigan being blamed for something he didn’t do, how noble he is lying to protect others, and how even as an older man he’s still got it.

Another example of how women are treated in Sin City is Lucille, a parole officer, attorney, and the only gay character of the film. Despite her intellectual qualifications, she is reduced to her sexual orientation and objectified at every opportunity, especially when she is in danger. Just like Nancy, any aspect of her character outside of a source of angst for the main character and sexual gratification for the audience is almost nonexistent. Later in the film, she is kidnapped and gets her hand chopped off and eaten by a maniacal serial cannibal played by Elijah Wood (yes, you read that right) before being murdered by the police for shock value. And these are two of many female characters who receive the same treatment.

Basically, my main problem with Sin City’s depiction of women is this: every female character is treated as an objectified damsel. They are never as powerful, or given the same satisfying narrative arcs, or allowed to be as violent or morally complex as the male characters. Their independence is constantly undermined because they are never allowed to defend themselves, and usually end up brutalized by the villain before being saved by the hero. I wouldn’t be surprised if the treatment of these women is an insecure response from the writer’s fear of female power or sexuality, because it’s clear that Sin City is a distinct male power fantasy where beautiful women only exist for men to save, avenge, or fuck.

To watch this movie I have to get past the uncomfortable ass shots, the casual cruelty against women, the only Asian character being martial arts master, the only mention of gay men being the “fag joint”, and a myriad of other tropes and stereotypes taken so seriously to the point of absurdity. Watching the film with my friends revealed how uncomfortable it was to anyone who wasn’t desensitized to the film’s violence and political incorrectness. And though I enjoyed Sin City it raises the question: why should audiences have to forgive, ignore, or get over offensive content to enjoy films?