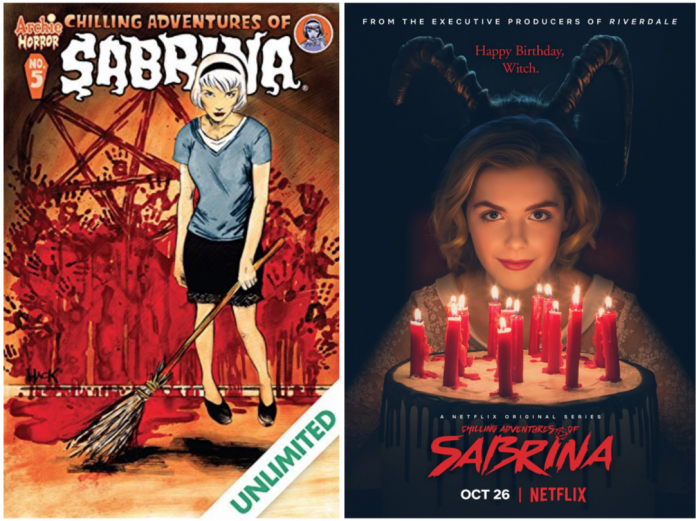 When advertisements for Netflix’s 2018 Halloween series, The Chilling Adventures of Sabrina, was announced, we femmes and feminists shared a mutual gasp of excitement, and the series essentially delivered on all that we could have asked for: Sabrina defends her best friends, Susie and Ross, by wreaking revenge on the oppressive men at school, and the vintage fashion inspires us to reclaim the appeal of the modern dark ages with saddle shoes, red lips, and trench coats. Ross Lynch even dyed his hair red to enhance his character’s small town charm, and we are going crazy for it, among other things.

But should we consider that we love the show so much, because the makers have a roadmap to follow? The teenage witch series isn’t exactly uncharted territory. We’ve been down this road before in Sabrina the Teenage Witch (1996), Charmed (1998), Bewitched (1964), American Horror Story: Coven (2013), and we can even throw Wizards of Waverly Place (2007) in there too. Beautiful and witty girl of 15 years learns of her inherited supernatural abilities. While fighting rejection from her wizarding side for living as a human simpleton and hiding her truth from human friends who wouldn’t understand, young witch finds herself torn but continues to secretly cast a few spells to serve and protect her family and friends along the way. What will she choose?! The tension is killing us, despite having seen it so many times before; that’s a formulaic success story if there ever was one.

As expected, Sabrina embraces her inner witch and dances with the devil (yeah, the actual devil) to maintain her relationships with the humans she cares about. So far this sounds familiar, and I myself relate to Sabrina for her choices, but if we dig deeper, we can find a few misgivings.

Let’s talk blonde hair and racist Hollywood casting calls. If we follow Disney’s lead and equate whiteness with beauty and beauty with purity and perfection, Sabrina’s transformation from blonde to platinum white hair, as she fully signs her soul away to the Devil, can signify her loss of human flaws and transition to a perfected supernatural creature. How disappointingly stale!

Additionally the show links her magic with selling her soul to the Devil, validating the basis for the paranoia underlying the Salem Witch trials. This affirms the centuries old fear of the powerful female as being in cahoots with the Devil and a danger to all good people.

Finally, Harvey Kinkle is just an updated Darren Stevens, superficially acceptable, but a dud at any depth, who just adds to her inner isolation. Because of Sabrina’s wit and supernatural ability, she is unusually self-reliant. Unfortunately this makes it impossible for her to fit the role of a traditionally submissive housewife, so Harvey’s ego is left unfed and hungry. Obviously this creates tension, but the smart, capable Sabrina is forced pretense and over-caretaking her man. Her feminist endeavours leave her romantically unsatisfied. She can’t be in her power and have her relationship too.

So, nothing new here. Worse, we still like the show, because the women can’t reveal their power formula still works. If a character with ‘Brina’s girl power and feminism is entirely absent, if not cursed and unholy, we will continue to watch the Witch Kitsch, repackaged a few times each decade. Yesterday I saw a meme of Nancy Pelosi flying on a broom in a witch’s costume. Female power, feared and derided. Need I say more?