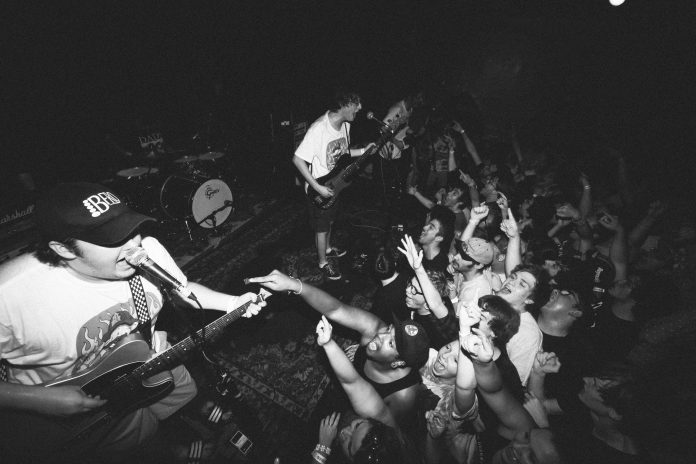 Did you know Santa Cruz used to have a hardcore punk scene? Like a real one. It was no Oakland, but during Hardcore’s hey-day in the mid-80’s Santa Cruz was on the map of California’s underground music scene. The boom of relatively popular and extreme music coming out of the town can be attributed in large part to the opening of “Club Culture,” a dedicated punk venue located on Front Street in the early 80’s. The club hosted ridiculous rockers ranging from death-rock freaks 45 Grave to tough guys like The Dicks. Coming-up in the Santa Cruz scene were bands like M.A.D., Scapegoats, and The Child Prostitutes – the former two being included on MAXIMUMROCKNROLL’s 1982 hardcore comp “Not So Quiet On The Western Front,” the quintessential Northern California/Nevada punk mixtape of the decade.

M.A.D. later morphed into the worse band BL’AST, a Black-Flag-worship group that got signed to SST – undoubtedly the most successful of Santa Cruz’s class of ‘84. Clearly bands like BL’AST and their surf-punk disciples were influenced by the genuinely violent surf culture here in the 80s, with Eastside/Westside turf wars resulting in regular jumpings. After all, once upon a time, Santa Cruz was synonymous with the harder edge of Surf City, USA.  Here’s the fellas raising hell around Eastside in the music video for their super corny “Surf and Destroy” (jock hardcore at its OK-est):

So what happened? Well, the big quake of ‘89 happened, shaking down a good chunk of downtown Santa Cruz’s architectural landmarks in the process. The subsequent reconstruction of the city during the aesthetic dark-age of the digital era desecrated the area’s cultural vitality (with architecture being the mother art and all that yadda yadda yadda). On top of this, the area’s proximity to Silicon Valley and its legions of techie cyber-sadist dweebs, accompanied by the settling-down of Gen X neo-yuppies and braindead new-age hippies effectively put the nail in the coffin for Bay-Area punk around the turn of the millenium. As these folks became America’s predominant consumer body, their tone-deaf sensibilities fed the popularity of bastardized “indie” bands throughout the aughts. This in turn skyrocketed the poser youth to the vanguard of independent music, where they proceeded to kiss the feet of their parents’ generation rather than keep them up all night. Punk was exiled to the obscure corners of the internet and the occasional house show, which didn’t seem to trouble the increasingly despondent and elitist punk youth much at all.

What was once home to Club Culture is now a heinously hideous dance-studio space, offering weekly sessions of “awareness-based classes like Qi Gong and Ecstatic Dance, and freestyle to lightly guided jams such as our Tuesday Contact Jam and Inner Rhythm.” YUCK! Rich old yuppies taking interpretive dance classes on the old stomping grounds of the long-dead Santa Cruz underground is the perfect encapsulation of the city’s current cultural sickness. Pergolesi’s closed, they’re paving the lost boys bridge, and bulldozing Kresge (UCSC’s most important architectural sight by a mile) instead of colleges 9 and 10. We need a new generation for the teenage nation! This time let’s do it right!