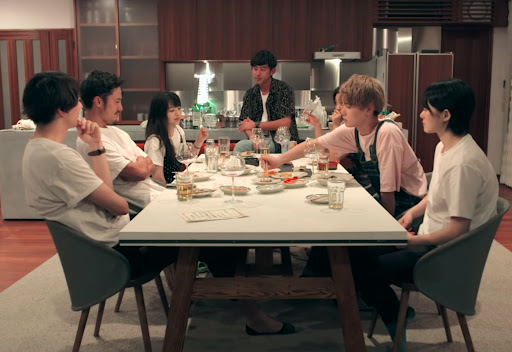 In 2019, I became an avid watcher of the reality series Terrace House. The Japanese television series centers around six strangers, capturing their various day-to-day interactions as they adjust to their new lives in a shared household. The premise itself seems pretty mundane, especially in comparison to popular American reality shows which rely and thrive on dramatic altercations, testing romantic relationships, extravagant prizes, etc.. Despite this, Terrace House’s presentation as a largely uneventful show (almost) successfully conceals deep-rooted concerns of online bullying within Japan.
The participants on Terrace House join for various reasons: they want the exposure to further their career, become independent, share their aspirations with others, or just want the experience of living with housemates. There is no end goal for the participants; they are free to leave whenever they please, and a new housemate will take their place. While Terrace House shows the occasional disagreements, love triangles, and personal dilemmas, none of these situations are blown up to the extreme proportions that they are in American reality television.
This was part of the appeal which drew me to the show– it truly felt unscripted (as opposed to the blatantly artificial quality of American reality TV) and authentic. American reality shows like Keeping Up With the Kardashians feature the famous sisters in screaming fits or arguments, losing their diamond earrings, and other situations unrealistic to the average viewer. On the other hand, the nature of the Terrace House felt private and intimate– the cast’s small exchanges and daily troubles were often relatable and always realistic. It was the perfect show to leave running while I did my laundry or washed the dishes, keeping my hands busy while tuning in to the members talk through their issues.
However, I think that part of this appeal is what made the show so dangerous; the cast’s everyday problems are presented in such a way that the audience becomes so easily sucked into their personal lives. I sometimes forget that the episodes are so carefully constructed and the footage strategically stitched together. The episodes feature very domestic scenes like cast members chatting around a dining table or having such minimal disagreements over housekeeping rules, which made me feel like I was personally involved in their lives.
Another key component of the show is the commentators– five Japanese comedians/public figures appear in each episode to discuss the various situations and relationships in the house. One commentator in particular, Ryota Yamasato, acts as the show’s very own Simon Cowell, often (“humorously”) making harsh judgments and typically snide remarks at the cast. The commentators’ responses help the audience easily align with their perspectives without a second thought. I found myself often agreeing with the consensus reached amongst the commentators, taking sides on arguments on the show or rooting for the downfall of a particularly annoying cast member.
This contributed to the biggest issue of the show: its wholesome facade which conceals the effects of the show’s reception online. The hate received by the members through social media is an issue that is largely brushed over in the actual episodes; this further upholds its deceptive nature as a mellow, peaceful show. It fails to regard what is happening when the cameras are not rolling and neglects the impact of hate comments.
This was made glaringly apparent to me and thousands of other viewers with Hana Kimura, a Terrace House member who was driven to suicide after an influx of hateful comments online. Her death in May of 2020 sparked intensive discourse over cyberbullying/bullying culture in Japan and questioned the show’s responsibility for her passing. This event completely transformed my view of the show and served as a firm reminder that the show was being manipulated to seem authentic.
The lighthearted commentary and illusion of the audience’s involvement with the cast’s personal lives that was generated by the structure of the show proved to be dangerous instruments which fueled hate comments on the internet and had largely unseen influences on the cast’s mental health.
I think that the show’s abrupt cancellation was for the best; even with Japan’s (underwhelming) attempts to create stricter punishments for cyberbullying, I think this is a difficult issue to tackle legally and will remain a larger cultural issue that lacks a simple solution. Although I loved the comforting qualities of Terrace House, I think it would be inappropriate to continue the show anytime soon due to how the issue of bullying is so heavily ingrained in Japanese culture.
References
Margolis, Eric. “The Fall of ‘Terrace House’.” The New York Times, The New York Times, 17 July 2020, https://www.nytimes.com/2020/07/17/arts/television/terrace-house-suicide.html.
Hassan, Jennifer, and Julia Mio Inuma. “Japanese Star Hana Kimura Likely Took Her Own Life after Relentless Trolling. One Man Who Targeted Her Was Just Fined $81.” The Washington Post, WP Company, 31 Mar. 2021, https://www.washingtonpost.com/world/2021/03/31/hana-kimura-troll-fine-japan/.