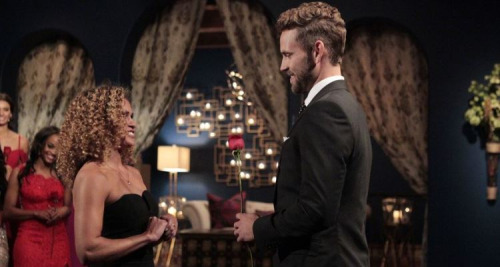 One of my favorite things about entering the new year was the new season of The Bachelor. When the season premiered, I was still on vacation with my family and I persuaded my mom to allow me to watch it by myself in a separate room of where we were staying. Although many people see this show as an event where women gather together to watch each episode, wine glass in hand, I find myself always watching it alone in pajamas, with some sort of snack close by (I am a stress eater). But my interest in the show always confuses people, especially myself. I actually started watching it in college, rather than watching it with my family growing up, since the show’s drama helps get my mind off of stressful school work. So despite my lack of sentimentality for the show, I created my own tradition of watching The Bachelor.

But I was very surprised when I watched this season’s sneak peek that one of the female contestants has a history of dating girls. I was excited for the hope of better representation. Can you believe it? A bisexual on the most heterosexual show to ever exist? And heterosexual in a really weird way since the whole idea of this contest seems to bare a resemblance to polygamy, where one man is allowed as many females as he wants and these females just have to be okay with it. The Bachelor seems to present a reality where women must be loyal to their husbands, while their husbands may explore their sexuality and marry as many people as they want, because men are men, and they can do what they want. This is a disgusting double standard that the show continues to perpetuate, although the network seems to think that they solved the problem by creating The Bachelorette in 2003. This possibly bisexual female, named Jaimi, walks into the first day, looking awesome with a septum piercing which she announces to everyone by saying “she has balls.” Although I didn’t find this funny, I do find it endearing since there haven’t been many women on The Bachelor who show off nontraditional stylistic choices  like facial piercings.

When I saw the preview, I wanted to tell the world about my excitement for The Bachelor, a show I rarely talk about with my friends. But after watching four episodes I realized they neglected one thing: actually saying the “B” word. Bisexuality is still very much taboo, and maybe ABC is consciously keeping that out of the script because if you don’t say it, maybe it doesn’t exist. Which is wrong. Bisexuality does exist! Bisexuality is not a bad word! Bisexuality is a valid sexuality! And I know ABC considers itself a family friendly channel, but denying a basic sexuality that many people identify as seems completely ignorant. Also, if ABC is afraid to let a child hear the word bisexual because who knows what kind of harm that will do to their innocent ears, I wanna fire back the question: who is letting their child watch The Bachelor?? The show is absurd; someone is always making out with the bachelor and they always talk about sex (I think bisexuality should be the least of your worries as a parent since your child’s innocence is likely already tainted after watching the opening credits). But honestly, this omission of the word bisexuality bewilders me. Despite not saying the “B” word, Jaimi did at one point jokingly call herself a lesbian while she had to do an athletic event. Which makes me further question ABC’s choices. They exclude bisexuality but they allow a person to jokingly call herself a lesbian in a stereotypical fashion? Even more disturbing is how ABC allows the word lesbian so easily, as if queerness according to popular television can only come in a binary, heterosexual and homosexual, and nothing else can exist. Therefore, The Bachelor perpetuates a limited spectrum of sexuality, although sexuality is way more intricate, especially compared to the dumbed down version of heterosexuality provided by The Bachelor itself (man marries woman, happily ever after, etc.).

I desperately want to believe that The Bachelor can improve as a show, but I am really starting to doubt this fact, because with every step forward the show seems to also take a step back. It seems to be making no progress despite the plethora of criticism the show receives. The Bachelor represents an archaic idea of life and love and the movement toward representing more than the average heterosexual couple does seem like a sign of overall progression in society. But also, a more selfish part of me thinks part of the reason I want The Bachelor to progress is because I want stop being heckled for watching it, and feel like I’m not a bad person for enjoying it. Beyond this one issue that I have noticed while watching The Bachelor this season, there is so much that could be discussed in relation to this issue: Jaimi’s race in comparison to the blatant racism this show seems to perpetuate with its unforgiving whiteness, how bisexuality and lesbianism are fetishized among straight men, the overall hostility towards bisexuality, and more.

But hey, the season isn’t over yet. Actually we are only six episodes in, and Jaimi still hasn’t been eliminated. So maybe the show with continue to surprise viewers this season and finally use “bisexual” in the text of this show. Or maybe bisexuality will be left unsaid, as it often is. I guess I’m going to have to keep watching to find out.