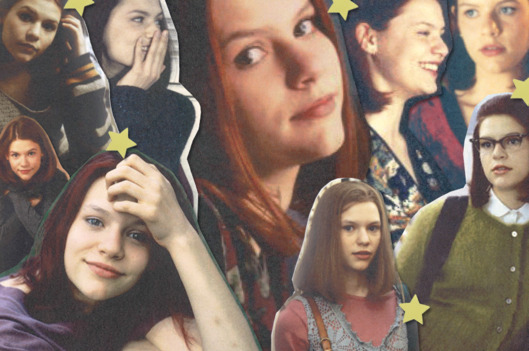 I recently had a friend send me a quote via text – “I will always cherish my initial misconception of you.” My friend then explained, “It reminded me of what we all do … how we create fantasies around people, imbuing them with our dreams, desires, romantic longings…” This idea – the projection of personality onto our ‘crushes’ – reminded me instantly of nineties cult-classic TV show My So-Called Life. MSCL brought us the complex, introspective and deeply longing character of Angela Chase. Angela, the show’s fifteen year-old lead, is both naive and subtly wise, leading audiences through her tangential thoughts in her many ‘like’ infused voiceovers. (“There’s something about Sunday night that really makes you want to kill yourself,” she muses.)

A central plot line of the show is Angela’s infatuation with teen dream Jordan Catalano, who boasts shaggy hair and inexplicable cool. In contrast to Angela’s thoughtful demeanor, Jordan is coarse and intellectually limited. Angela is infatuated by Jordan, who she sees from afar and likes for the qualities she believes he possesses. (“He’s always closing his eyes, like it hurts to look at things.”) Jordan is somewhat interested in Angela, especially in the physical aspect of her, but fails to do what so many of us are guilty of – he fails to truly see her. In teenage solidarity, she in turn fails to see him. His many failings are lost on her – his lack of sensitivity, his mistreatment of her, his conformity to his friend group… leading to a desire doomed to dissatisfaction.

An interesting scene in the series addresses the way that love occurs. The student’s high school English teacher shares a Shakespeare sonnet with the class, in which Shakespeare writes of a mistress who is by no means an angel: “My mistress’ eyes are nothing like the sun; / Coral is far more red than her lips’ red.” Shakespeare’s love is not a goddess, she “treads on the ground.” When asked why Shakespeare loves this girl, Brian, Angela’s neighborhood friend and the school’s resident nerd, answers, “She’s not just a fantasy. She’s got, like, flaws. She’s real.” Brian and Jordan are shown contemplating their feelings for Angela. Jordan appears to be coming to terms that he might like Angela even if she is not the type of girl he ‘sees’ himself with. In this scene, the characters are asked to think of what it means to love someone, and what one should be loved for. They are asked to discover the reality of one another and to love each other for the truth that presents itself.

As the series ends, Angela is becoming more aware of Jordan as a person and perhaps her lack of true affection for him. In the final episode, Brian tells her of his feelings for her (via a letter he wrote as Jordan) and she finally listens. She is then caught between the two – her infatuation with Jordan which is beginning to fade and her slowly developing interest in Brian. This change of feeling from Jordan to Brian marks an interesting moment in Angela – the time we all begin to grow up from romantic fantasy and demand the reality of connection. Although Jordan is ‘hot,’ as in having social status and high levels of ‘cool,’ in the end, Angela is doomed to dissatisfaction with him. She begins her awakening as she realizes someone who cares and sees her – truly sees – might just be worth it.